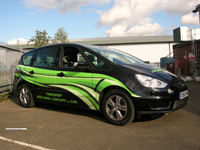 Electric cars are often in the news these days. This is because transport has become the largest user of energy in the developed world and is growing at an explosive rate in the developing world. It is the largest producer of CO2 and curbing its growth presents an enormous challenge to society at large – there are currently 26 million cars in the UK alone. Road vehicles are seen as a major contributor to carbon emissions –  leading to climate change and catastrophic retreat of sea ice levels. It is estimated that half of traffic on Britain’s roads in 15 years time will have some form of electric propulsion (currently 0.1%). There are however massive infrastructure and health and safety issues to be faced for the wholescale introduction of plug-in cars and hydrogen fuel cell vehicles.

LPE took out a patent in 2006 for a new type of hybrid powertrain to provide a practical solution. This provides an electric car with an on board generator to keep the batteries charged. This sets it apart from the hybrids now available such as the Lexus and the Toyota Prius which use a conventional 4 stroke engine to provide both vehicle drive and battery charging.

Most of the world’s electricity is generated by the use of turbines rather than reciprocating engines. With this in mind, the ‘Whisper’ powertrain has been built at LPE’s Wellingborough factory as a ‘series hybrid with a micro turbine range extender’. The continuous combustion of a turbine when working at constant speed permits more complete combustion than is obtainable from the 4 or 2 stroke cycle and the new powertrain provides ultra low emissions, high fuel efficiency (with up to 80 mpg), multi fuel capability, no requirement for coolant or lubricating oil, long life reliability and robustness. This car travels 40 miles on electric power alone before the turbine generator kicks in.

Jet planes, jet boats, jet skis  - now jet cars ! But turbines have been tried before. The Rover BRM was a sports racing car driven at Le Mans in the 24 hour race in the mid 60’s by Sir Jackie Stewart and Graham Hill, Lotus ran 2 single seat racing cars at Indianapolis and Chrysler produced 50 turbine road cars for evaluation purposes. However, problems largely associated with slow throttle response prevented the large scale commercialisation of the gas turbine for everyday road use – until now.

The new technology is installed into a host vehicle, but can be fitted into any vehicle of this size or larger  -  the photograph shows the concept car and there are plans to develop this powertrain concept with suitable partners into prototypes for production.